The cenachero was a fishmonger who in his cenacho o espuerta carried the fresh fish that he sold it on the streets of Málaga.

The cenacho was made by hand with esparto -this is a fiber- and was filled in the beaches of the coast. Normally they sold anchovies, but also jureles, sardines or chanquetes.

There is a bronze sculpture in the square of La Marina in Málaga city. It is a symbol of this city.

As a curiosity, the American city of Mobile in Alabama has a replica of this sculpture. It was donated by Málaga in tribute to the twinning between both cities. It is located in a fountain in the Málaga Square, which is a square dedicated to Spain and where some Spanish flags are flying and where there are “friendship bows” (arcos de la amistad) also donated by Málaga. 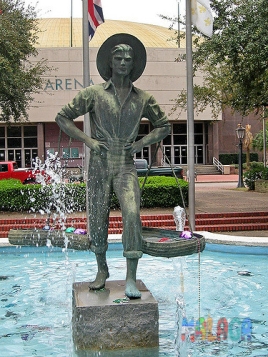